Byrider gives people credit for more than their credit score

Finding new customers by creating a new kind of credit.

J.D. Byrider has long been known for providing in-house auto financing to the subprime credit market. But to reach a more modern consumer, it was time for a rebrand. They started by shortening their name to Byrider, then tasked us with the rest.

A closer look revealed that Byrider was helping those who had been turned down almost everywhere else. Because, unlike most dealerships, they were willing to look past people's credit scores and find other ways to get them approved. In a way, they were giving people extra credit for all the little things they were doing to get their finances back on track.

So we set out to show people with less-than-stellar credit that Byrider would give them credit just for being themselves.

A poor credit score has long been the scarlet letter of the financial world. But with the new campaign encouraging people to "Get Credit for Being You," we showed them that Byrider wouldn't judge. Instead, they'd look at extra factors to help people get approved.

To make the consumer experience as contemporary as the brand message, we updated the logo and website design. And with a new online approvals process, we made it even easier for shoppers to get approved and behind the wheel.

Giving credit where credit was due.

To connect with prospective car buyers who have a few dings on their credit report, we used super-slow-motion video to focus in on the joy, surprise and excitement customers feel when they finally get approved instead of declined.

With our new messaging driving more people to the website, we revitalized the way customers interacted with Byrider online through localization and a streamlined approval process. By using geolocation, we showed visitors available vehicles at nearby dealerships. And by implementing automatic online approvals, we turned what previously took 30 minutes over the phone into a 3-minute pre-qualification—a 1000% increase in application efficiency.

Bringing the customer experience up to speed.

Of those who started the online application, 83% completed the form, saving Byrider countless hours previously spent completing approvals over the phone. Plus, in keeping with our brand campaign, no customer was automatically declined. Those who weren't pre-approved were instructed to call so Byrider could look at extra factors beyond their credit to help them get approved. 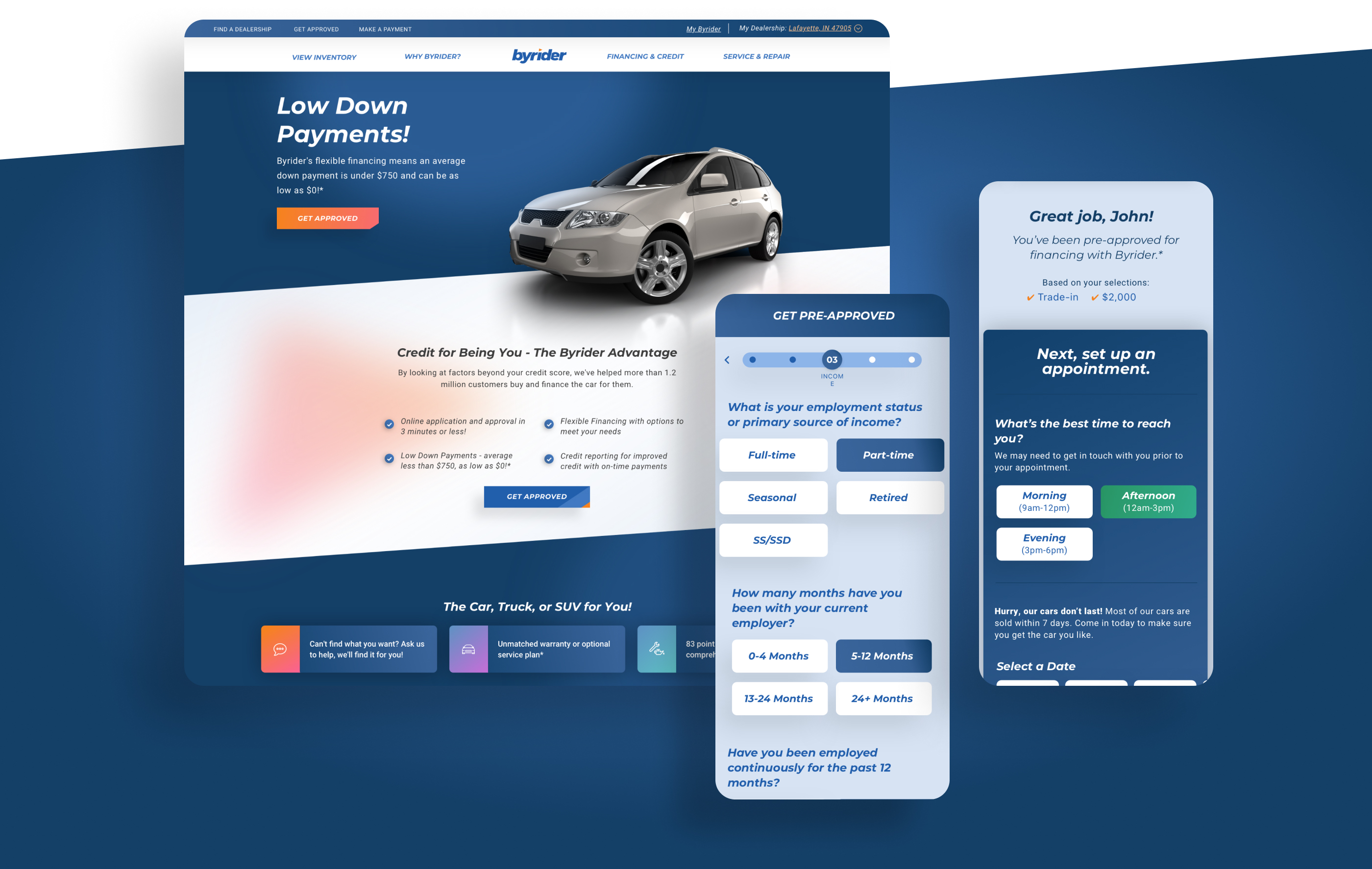 Many people still remember the catchy J.D. Byrider jingle that ran for more than 30 years in the '80s, '90s and 2000s. With the updated name, Byrider updated their jingle, and we created a catchy way to re-introduce it.

The perfect template for more than 150 franchise locations.

To keep creative fresh, we created 20-plus modular videos that could be easily customized to handle monthly sales events, grand openings and one-offs like Black Friday - all with different offers running at varying times in markets around the country. So far, more than 3,000 spots have been versioned and trafficked to help people get credit for being themselves.